May 26, 2008
We don’t have tons of time to watch TV and we really can’t stand commercials, but here are some of our guilty pleasures…with some explanations 😉 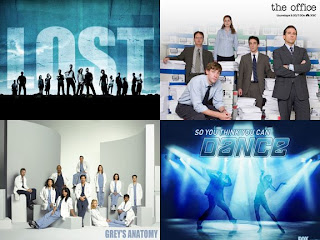 Lost: Well, that show doesn’t need much explaining. If you have never seen it, please start from the very first episode and pay attention; no folding laundry or needlepoint during this show! We especially love the editing and the writing, and it shows in HD which is super awesome…And, if you’re a super nerd, you can go to lostpedia. That’s right, Lost has it’s own Wiki with all the theories and character links. Season finale this week!!

The Office: Some people are not into this show because they like the British version better. I’ve never seen the British version, so I’ll claim ignorance. I do like this version especially when they tone down Steve Carell’s character a bit, he can definitely be too much. What I want to know is what happened after the writer’s strike? The Office was very hit and miss the last few episodes…hmm. I do like the website with all the character blogs, they’re fun.

Grey’s Anatomy: Definitely my guilty pleasure…To be honest, I’ve always liked doctor shows. My mom and I used to watch E.R. for years! But I’ve gotten into Grey’s Anatomy and have given up on E.R. I really like the music choices and “artsy” feel they give the show, even though it usually is way over the top. But my husband watches it with me, that’s all I can ask for 🙂

So You Think You Can Dance?: How can you not get into this show? It’s just like American Idol; the first few episodes make fun of people, there’s an annoying female judge, and a male British judge who is the only one with any sense. But why I like it better than American Idol is because it’s with dancing and I understand dancing better than singing.

So, there’s a little insight into our not-so-thrilling tv watching habits.