We had so much fun filming these two at the Hotel Del Coronado!! It’s so exciting for us to see the start of things since we’re usually shooting weddings. We don’t usually get to see how it all began. We were so excited when Michael first contacted us to let us know that he was thinking about proposing to his girlfriend. They are from the East Coast and they’d be taking a trip here to San Diego and she had no idea!

On the day, we met with him in the lobby to mic him up and we asked where she thought he was. He told her he was buying some Tylenol. We asked her later if she had any clue and she said that he had been acting strange. Plus she thought he’d been gone quite a long time for just buying one item, but she still had no idea.

He walked her down to the beach and we tried to hide as best as we could along with the photographers, Michelle Johnson Photography. They were hoping for sunny San Diego skies, but it was pretty June gloomy. We thought the skies were beautiful and it made for some pretty even light. Of course the Hotel Del Coronado backdrop was awesome. Leslie thought someone might take her shoes when they took their shoes off! We laughed about that later.

We thought that she’d notice us but later she said she thought we were just one of the many tourists with cameras. Of course, that’s what we were hoping she’d think! Our favorite moment was of course when he dropped to one knee. We couldn’t hear what they were talking about since we were so far away. But we could see her saying yes and hugging him. It was so fun to work on this and see how it would all turn out. 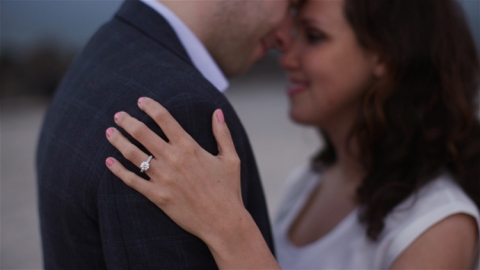 Music – Hey, Ho, by the Lumineers, licensed through Songfreedom