San Diego’s Hilton Bayfront hotel is such an awesome spot for weddings! They have towering views over San Diego’s downtown and they are walking distance to the gaslamp district. The rose gold jewelry was just beautiful and they even painted some of the flowers to match. The ladies had a great time during the getting ready time and were laughing most of the time. The girls wore blush pink which complimented the rose gold very well. Megan’s headband was so cute and her bouquet was fantastic.

Harry also had a great time with the guys, they had a little trouble with the pocket squares. I will definitely post a video on that someday because this isn’t the first time! His guys toasted him and then the guys and girls took photos separately. They didn’t do a first look which doesn’t seem to be as common these days but they wanted to save that moment for the aisle.

The ceremony was overlooking the ocean and it was so sweet. Their vows could not have been sweeter and we loved getting to know more about them. The vows were so sweet that the officiant even had them hug after each of them spoke. So great!

The Hilton Bayfront was great for a reception and Bliss Events did a great job coordinating everything. The cocktail hour was on the balcony overlooking the ocean and the guests could take instant photos for the guest book. I loved that in their candy “bar” they each had one that was their favorite. That was a nice touch. The cake was very pretty and the gold glitter on it was a nice touch! They had meaningful speeches and beautiful dances. And during open dancing there was one of the longest dance circles I think we’ve ever seen.

They were such a sweet couple and we hope you enjoy them as much as we did. Here’s their story:

Harrison and I watched the wedding films and they were all breathtaking!! You guys did such a wonderful job, thank you so much! 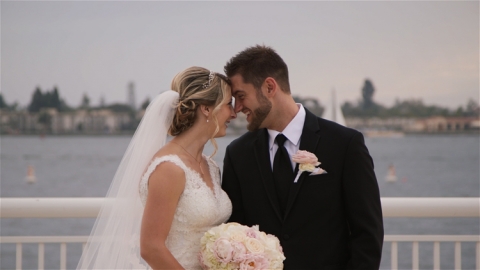 Music – A Thousand Years, by Christina Perri, licensed through Songfreedom