Honey and JayR had a beautifully themed garden wedding at Green Gables Wedding Estate. He’s a barber, actually kind of a famous barber and she’s a teacher. The teacher meets barber theme was carefully crafted and included in every part of the day. The girls got ready in the school house and the bride did some pre wedding push ups to get in the game. Another fun thing was that their doggy was part of the wedding and got ready with the ladies. The guys got ready elsewhere but got their boutonnieres on at the venue. JayR also had a pin that his friend created for him that shows him with his barber shears, so neat. We just loved how many details there were at this wedding.

The first look was so cool First of all, these two weren’t totally set on having a first look so when they decided on it they wanted to make it really special. Honey had a huge balloon to hide her and then released it as she walked up. JayR was so nervous he was going to cry but they had a beautiful first look and a fun photo shoot after that. They even had a school bus to take a few photos with. Their ceremony was beautiful and meaningful with verses from the Bible and personal vows. The details were cute there too with Honey’s teacher apple on her vow book and Jr’s barber pole. Also, the guests were supposed to throw paper airplanes as they walked down the aisle after the ceremony!

The reception had tons of details for their theme. They had bells to ring to encourage them to kiss, pencils to find your seat and tables with class names, including detention! Even the drink station was named “recess”. They just had it all at the reception. A Ferrari grand entrance with glitter poppers, a performance from a famous Hawaiian duo and cronuts! They had games, a photobooth and lots of great dancing. They had such a great wedding, we hope you enjoy their film!! 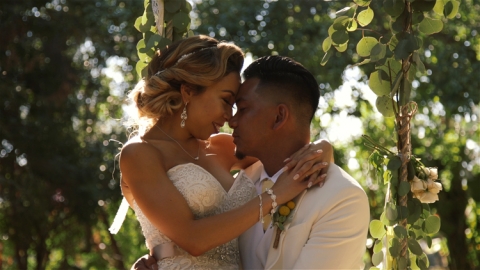 Music – Call me Higher, by All Sons and Daughters, licensed through Songfreedom