Kristi and Brandon had a beautiful Temecula wedding at the Villa de Amore. Their wedding was on April Fool’s Day but there was only one joke all day and everything else was just love love love. They decided against a first look but instead did a gift exchange behind a door. It was really cute and a nice idea if you can’t decide on a first look. They got to chat with each other, calm the nerves and give each other sweet gifts. But he still was able to see his bride for the first time while she was walking down the aisle!

The guys and ladies each had some sweet moments together while they were getting ready. Kristi’s dad officiated the ceremony and had a nice moment with each group praying for them. Kristi had 5 little nieces running around who were so adorable! After they were finished getting ready and finished with their exchange, they all headed out to the ceremony. The verses about love all down the aisle were super neat and they had all their guests signing a wine bottle or box.

They had a sweet ceremony with touching vows. It was a nice day with beautiful weather as well! After the ceremony, the couple took beautiful photos all around the property. Their guests enjoyed cocktails and refreshments, bocce ball and corn hole. They had an awesome grand entrance with the one and only April fool’s joke. Kristi’s sister was pregnant and so they pretended she went into early labor! But then at the last minute she emerged for her entrance.

Brandon and Kristi had their first dance and their friends gave lovely toasts. After dinner they had a S’mores bar, cocktails, dancing and late night tacos. They all had an awesome time dancing in the perfect springtime evening.  It was a great Temecula wedding.

Congratulations you two on an awesome wedding! 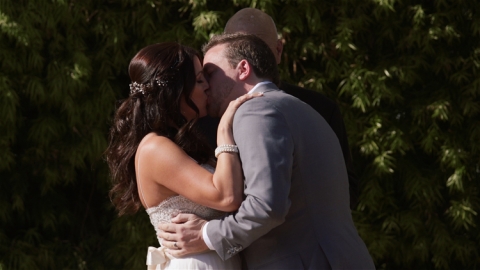 Music – Giving it all to you, by Haley and Michaels, licensed through Songfreedom

© 2022 Side By Side Cinema | San Diego Wedding Videography|ProPhoto Website