Johanna and Andre had celebrated their beautiful wedding at Villa de Amore Temecula. They rented a really awesome house right across the street from the venue and that’s where the girls got ready. It was great, so relaxing and a ton of space for everyone to do hair, makeup and pack up fun goodies for the reception. Johanna finished practicing her vows while getting her hair done. The girls enjoyed hanging out and then headed over to the Villa. Johanna’s dress was waiting for her there and we got beautiful shots of her getting dressed and posing in the getting ready room.

Andre and the groomsmen arrived a bit later to get ready. He had awesome cuff links that were from Zelda and Jared totally geeked out on it. The guys took some photos and hung out until the ceremony.

The ceremony was beautiful. Andre hadn’t seen her before the ceremony so it was so great to see his face as she walked down the aisle. Johanna almost lost her veil at the beginning and they laughed a ton. They had really great vows and they each mentioned video games which was super cute. Her girls had asked her earlier if she really wanted to leave in the part where she promised she’d play them with him. She thought it would be funny to include it and it was perfect.

After the ceremony, it’s tradition for the Villa de Amore Temecula to do a group shot with all the guests. Then the wedding party went around the grounds to do photos. The guests enjoyed cocktails and lawn games. Their reception was outside and since their wedding was on mother’s day, Johanna was so thoughtful to include roses at the tables for all the moms. One of Johanna’s friends sang some songs and there were such thoughtful speeches.

After dinner everyone moved inside for dancing. Their wedding party had so much fun and was on the dance floor all night! They had some late night snacks and a sweet send off.

Hope you enjoy this beautiful wedding! 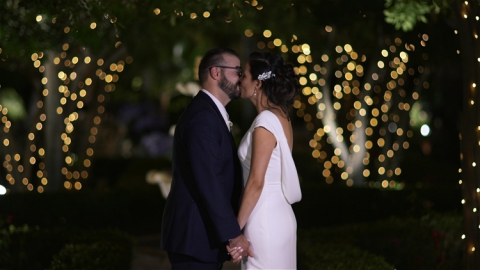