Brittany and Dave chose Encinitas for their seaside elopement this past summer. They rented a beautiful house (and we learned that it was actually Shawn White’s house that he was selling!) and spent a few days just relaxing with their little family. Dave got the boys and himself ready while Brittany finished her last touches of details. I loved all the dainty sparkly things and her “shoes” were adorable. The boys with their hats were to die for!

Their ceremony was on a landing on the cliff overlooking the ocean. It was the smallest ceremony we’ve ever filmed. Just the two of them and their two boys! They had amazing personal vows and I just loved that you could hear their kids in the background and they even had to hold the baby during the rings. It just was perfect because the kids were so much a part of the day and sometimes life is just messy and your kids need a snack during the ceremony!

After the ceremony, they had an awesome sunset for photo time. The baby was thrilled with the sand and their other son just wanted to play in the waves. They are such an adorable family. While they were taking photos, the chef was making their meal. They had an intimate dinner that looked absolutely delicious.

Because this was an elopement, there was only a ceremony, no reception events. But once the sun went down, we did some fun night shots with them with sparklers and lanterns. It was a beautiful night and a romantic seaside elopement. We hope they had an amazing time here in California, congratulations you two! 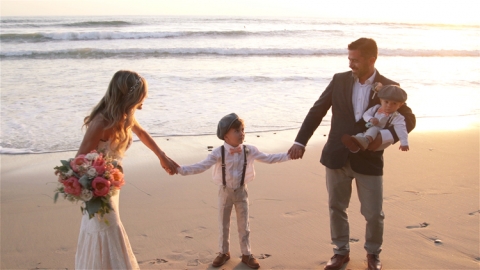 © 2023 Side By Side Cinema | San Diego Wedding Videography|ProPhoto theme