This was such a fun event for us! Years ago, we did a fun family video for this family. The girls were adorable little toddlers at the time. We’ve kept in touch with this sweet family and were so excited when they got in touch because their oldest daughter was turning 13! After 10 years in the business, believe it or not this was the first San Diego Bat Mitzvah we’ve filmed! It was really fun to see all the kids having fun together celebrating their friend.

They had a ceremony earlier in the day that we weren’t allowed to film but we did take a few photos. Then later in the evening, they had all the fun. First they had a cocktail hour for both the adults and the teens. The adults had a bar and fancy appetizers while the teens had fun kid friendly drinks and also fun appetizers like mozzarella sticks.

After the cocktail hour time, the teens got to go in and enjoy some dancing and fun by themselves before all the adults joined them. They had an awesome DJ who kept all the guests entertained with games and dancing. They had fun airbrushed favors of choice and a hilarious magician as well. After the teen time, the adults joined them and they had a grand entrance, Hora and tons of dancing.

Sydney had an adorable speech where she included her family and friends in the lighting of her thirteen candles. You could just see how much her parents were beaming and proud of their little girl! Dinner was amazing with different food stations and lots of variety. Everyone had an amazing time as you can see from all the dancing! This group was just so fun, what a great event. 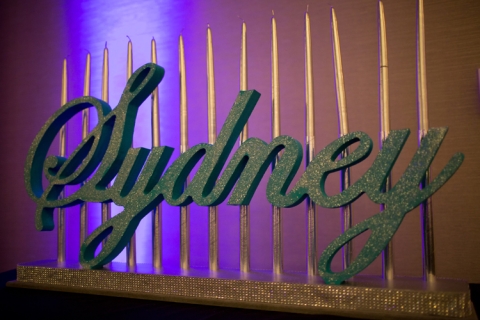