Olivia and Kris had a fabulous wedding at the Birch Aquarium in San Diego. They got ready nearby at Hilton La Jolly Torrey Pines and had so much fun. The girls were hilarious practicing their dance moves for the first dance. They even included a giant shark stuffed animal, which would make it’s appearance much later in the night.

Their first look was in the beautiful succulent garden at the Hilton. They were so adorable at the first look. She hid behind her gorgeous bouquet after Kris turned around so she could pop out from behind it. They did some romantic photos and photos with their bridal party before heading to the venue.

Their ceremony was looking out over the ocean and in front of a handmade backdrop. The flowers were incredible and there was the sound of the tidepool creating a relaxing ambiance. The officiant had lots of neat things to say and related their wedding and relationship to the ocean of course. After the ceremony, the guests were free to roam the entire aquarium which was really neat. They had cocktail hour outside and Olivia and Kris finished up some photos by the cliffs and in the aquarium.

The reception was inside the main area with sharks hanging overhead and a school of fish swimming behind the head table. The tables were beautiful and the reception energy was high. The first dance was hilarious with the whole bridal party involved with Disney songs and the stuffed shark! The stuffed shark made it’s final appearance as it was tossed instead of a bouquet or garter.

Hope you enjoy this super fun and beautiful wedding! 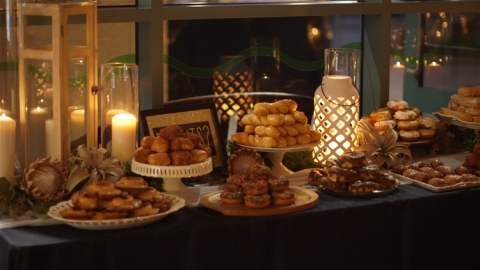